Like you, Maitreyi Ramakrishnan toyed with the idea of getting bangs in quarantine. (She went for it and, no surprise, pulls them off.) Like you, she’s also invested too much time in Animal Crossing (over 300 hours, to be exact). But unlike you, Ramakrishnan starred in a hit Netflix show, Never Have I Ever, and regularly sends memes to series creator Mindy Kaling.

Now, she’s using her newfound influence to diversify the worlds of Hollywood and gaming. Ramakrishnan has partnered with Gillette Venus for a new Skinclusive Summer Line that adds more than 250 skin representations to Animal Crossing. That means your avatar can reflect the freckled, scarred, stretch-marked, and appropriately skin-toned version of yourself that exists in the real world. 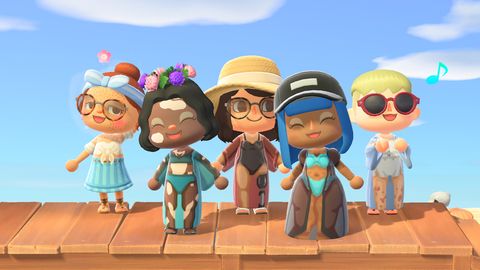 Eighteen-year-old Ramakrishnan knows firsthand how vital this representation is. “Being South Asian, growing up I didn’t really see any characters that looked like me,” she tells ELLE.com. “After doing Never Have I Ever, I realized how normalized that became to me. And that shouldn’t be the case. It’s a dangerous way of living, living from the shadows. Nobody should feel like that, no matter what your background is, how you identify.”

In the shadows no longer, Ramakrishnan says she’s using her moment in the spotlight to bring the stories of other marginalized groups front and center. “There should be representation for everybody—realistic and authentic representation, rather than a token check of a box on the list for diversity,” she says. Ahead, the Gen-Z star opens up about season 2 of her soulful comedy, her new partnership with Venus, and why she’s in no rush for an Emmy nomination.

Why did you want to partner with Gillette Venus for their new summer line and host its Skinclusive Summer Social on Animal Crossing?

I’ve loved Animal Crossing since I was a kid, so I’m incorporating something that I love to do for fun with skin inclusivity, which really means a lot to me. I’m excited to show everybody all the different designs we came out with, adding all of these personal skin realities to our Animal Crossing avatars. There’s all different skin tones, scars, tattoos—which is amazing. It’s something you can do within the game, and it took a lot of creativity. I really love this idea that Gillette Venus came up with for National Beach Day, because we obviously can’t be physically with each other right now because of COVID. But with Animal Crossing, this huge platform that has boomed within quarantine, we can make something sort of like a beach day.

You’ve been outspoken on social media about diversity and inclusion when it comes to beauty. What’s your advice for brands that don’t represent or make products for every type of woman?

To those brands, I would say step up their game, because the world is shifting and it’s getting out of this idea that there’s one version of beauty. Many brands have these seeded roots in colorism. That’s something that I personally have a peeve with. You’ve got to be better and change it up, because reality is, there are many different versions of what beauty is. It should be all about what makes you feel beautiful yourself rather than striving for a certain definition of beauty.

Never Have I Ever season 2 is officially coming. Do you have any updates on when filming will begin?

Honestly, I’m in the same boat as the fans. I don’t know what’s going to happen at all. I just know for me and of course the rest of the cast and the crew of Never Have I Ever, we all want to make sure that when we do start filming again for season 2, we’re doing it safely and responsibly rather than just rushing into it. We obviously want to make the best product that we can for season 2. But we also want to make sure that our actual crew and cast are all safe.

A highlight of the first season was John McEnroe and Andy Samberg appearing as celebrity narrators. Do you have a dream narrator for season 2?

Maybe not for season 2 of Never Have I Ever, but a dream narrator would probably be Morgan Freeman. Obviously, he’s done a lot. My brother actually, after seeing Evan Almighty, he thought Morgan Freeman was God. He thought that’s what God was like. And that Morgan Freeman wasn’t an actor, but that was just God in a movie. So that’d be so dope if I had Morgan Freeman just narrating a movie.

After the Emmy nominations arrived and Never Have I Ever was snubbed, Mindy Kaling suggested on Twitter that the show may always be “too ethnic or niche” for a certain group of people. Do you agree with her?

Honestly, we just have this one show, one show with a South Asian lead and there’s so much work to do in terms of representation. It’s still an uphill battle—definitely not where we were however many years ago—but no matter what, it’s going to be hard along the way. And I’d rather have it be an uphill battle. I don’t need an award or nomination to know that we’re still making change. The fact that there’s so many people watching the show and seeing themselves in it. The fact that my 10-year-old cousin, she watches it, she thinks, “Oh my God, that girl looks like me. That’s amazing.” That’s what matters to me at the end of the day.

What’s it like having Mindy as a mentor in the industry? And who are your other inspirations?

Mindy is the coolest. I absolutely love talking to her and and I’m really glad to say that she’s my mentor and actually my first boss. She really did help me a lot on set, finding my ground and figuring out everything. She’s always there to help me out if I ever need help even now. Then, sometimes I’ll just send her memes that I make, and that’s cool too.

I really do look up to Audrey Hepburn’s career. I think she’s amazing. And she wasn’t just an icon within the fashion world but also social justice back then. No matter how much of a pop culture icon she may be, I think she’ll always be underrated for her work and who she was as a person.

You’re the lead of a hit Netflix show—what’s next?

This interview has been edited and condensed for clarity.

The Best Moments From the 2020 Emmys
15 Playlists on Spotify That Will Help You Crush Your Next Cardio Workout
Molly Goddard Collaborates With UGG for Spring 2021
If You Want to Lose Weight, Trainers Recommend These 8 No-Equipment Exercises
I’m an Elected Leader and I’m ‘Concerned’ About a Peaceful Transfer of Power But I’m Sure It’s Fine